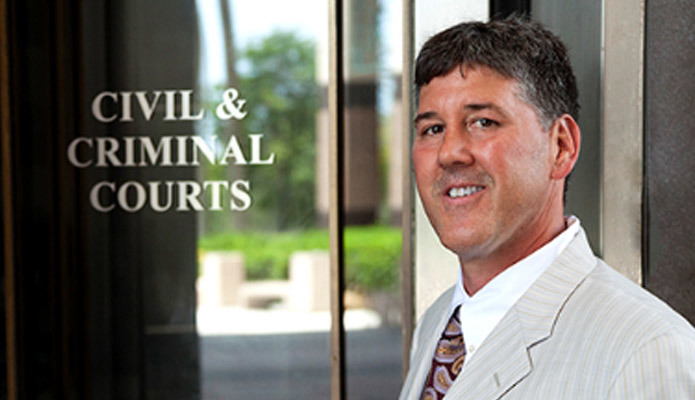 Appellate attorney Stine fought to get his client, restrained by an injunction, the due process rights mandated by law and denied by the trial court judge.

The law office of Andrew D. Stine has filed and successfully won many appeals over the past 14 years. Recently, the District Court of Appeals of the State of Florida Fourth District (4th DCA), agreed with Palm Beach County defense attorney Andrew D. Stine, when he successfully argued that Palm Beach County Circuit Judge, Lisa S. Small, denied due process to Mr. Michael Vaught when she entered an injunction against him in a domestic violence case.

On April 20, 2016, the 4th DCA issued its ruling and specifically stated that the injunction entered against the husband, Mr. Vaught, was entered in violation of his due process rights, because as the law requires allegations made by one seeking an injunction swears to facts in an affidavit, but did not provide the affidavit to the “respondent” in a reasonable time before the final hearing. In this case, the husband was not allotted enough time for him to retain legal counsel and as such, the injunction for violence must be set aside.

While the facts of all injunctions are very similar in that the petitioner, the one seeking the injunctive relief, will usually allege that the respondent, the one whom the injunction goes against, had either battered, assaulted or stalked the petitioner. This appellate decision holds that circuit courts are bound to give proper notice and time to the respondent, so that effective counsel may be obtained, so that the respondent may have proper time to obtain witnesses and enough time to properly prepare their cases for the final hearing.

In matters involving injunctions from abuse, judges liberally enter “temporary orders” prohibiting the respondent from any contact with the petitioner until a final hearing can be heard. So, the presumption of wrongdoing committed by the respondent is easily obtained with a brief signature of a judge, who has not heard any of the facts, but instead only read a sworn affidavit made by the petitioner seeking the injunction from abuse. Under the rules of civil procedure, the judge may also liberally set the cause for a “final hearing,” which in this case occurred within three (3) days after the respondent got served the injunction. Therefore, there was no time to obtain counsel, subpoena witnesses, gather evidence and properly prepare for the final hearing.

On the day of the final hearing, the respondent appeared without counsel. Respondent requested that the judge grant him a continuance, so he could have time to find a lawyer. The judge denied his request and made the respondent proceed without counsel and then entered a permanent injunction against  him.  Respondent immediately obtained West Palm Beach criminal attorney, Andrew D. Stine, who filed an emergency motion for re-hearing. In the motion for re-hearing attorney Andrew D. Stine argued that the respondent’s due process rights were violated, when he did not have time to obtain counsel and the judge made him proceed pro-se, (acting as his own lawyer). Moreover, appellate attorney Andrew D. Stine also argued that the more prudent thing to do would be to continue the “temporary injunction,” which keeps the wife safe, until the respondent could have found competent counsel and then proceed to a final hearing. The judge disagreed and denied the motion for re-hearing.

But the 4th DCA agreed  wholeheartedly with attorney Andrew D. Stine and specifically opined that “[any injunction shall be extended if necessary to remain in full force and effect during any period of continuance” and that “the respondent’s right to due process, because he was given neither notice of the allegations upon which [the petitioner] sought relief, nor a full and fair opportunity to prepare to meet those allegations was violative of due process.

This appellate decision in Michael Vaught v. Kathleen Vaught, 4D14-3699 can be read in its entirety at, http://www.4dca.org/opinions/April%202016/04-20-16/4D14-3699.op.pdf, and is a very important step forward in providing due process rights to those accused of domestic violence, domestic battery and all other matters in which an injunction is being sought. If you or a loved one is facing a criminal charge or requires appellate work from a dedicated and effective lawyer, contact West Palm Beach criminal defense attorney Andrew D. Stine. Hire Stine or Do the Time.